What's Wrong with the Blog?!

Ok, so after some elbow nudging from a beloved barn mate who reads my blog even though she's at the barn for prob at least half of my shenanigans (hi E!) I decided to post an update.

So... There's the D'Alonzo show I totally neglected to say much about. In fact I'm really bad because I haven't put it on the barn's web page either, because after a few days of harassing people about what classes they were in and what they placed, I got tired of trying and went back to neglecting it like laundry and dusting. Basically we moseyed in fairly late, I totally spaced it and only had time to do 1 lap of WTC one way then had to start flatting. 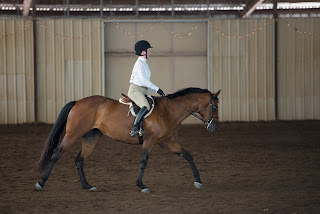 Needless to say in the stuffy indoor, Holly and I were a little out of sorts and didn't shine. I got all 2nds or 4ths. I kept getting pushed off the rail and then ended up in the endless circle of doom trying to find an open place while still looking pretty (Holly, not me, I try to look like I'm not gonna vomit, no promises of anything better). Again one horse dominated the 1st place spot in the flat classes, who conveniently they knew... and was for sale. Hmmph. 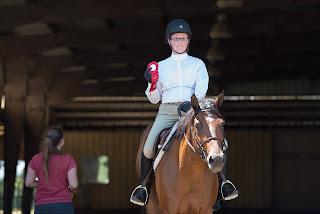 I did warm up Holly over small rails for WS to jump in the 2'6" stuff. If I hadn't been so hot I actually could have seen doing some of the little stuff because the sucky flatting had pissed me off, which made jumping less scary. But I was paranoid about going off course, which ironically WS did. Seeing as she was riding 3 horses back to back, I don't fault her for it. It is the very problem that keeps me chicken about jumping classes... well and the jumping....

I've jumped very little since then. Holly is awesome blossom summer mode, no lunging, no fuss. Little more leg, which my recently aged up ass needs.I have been regularly putting the boy on with me, he's still scared to go at it alone (can't blame him at 16h) but starting to really feel comfortable perched in front of my saddle on her. It was definitely easier riding with him on my friend's pony.

...... The barn is at a weird place. Karley left and rarely comes out at the same times as me. L is leaving. M's horse just had surgery and will be rehabbing well into the next year. E works and often doesn't make it early enough for weekday lessons. Two kids has my schedule jumping around and me tired.

This pretty much wipes out the majority of adults I ride with. I don't mind lessoning and riding alone or with tweens, but I'm first to admit that losing the social aspect makes me really bummed. I had a really cool group at the barn, of good friends, and I mourn the passing of the "Ladies Night" era we had. 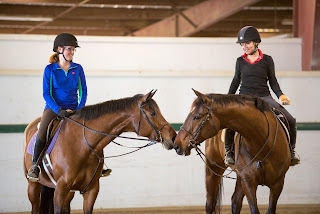 But life is about changes, and how we handle them, so I'll just read blogs and enjoy the times I do have friends with me at the barn. Getting to have my kids be a part of it has been such a hard but unexpected source of happiness for me... my wallet...well... 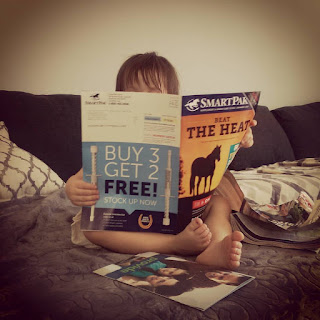