All the updates, 3 mo of Finnigan

Half a dozen drafts later, I gotta just post something.  I'm always waiting to edit media, finish laundry, feed a kid, something that gets in the way. So here we go. 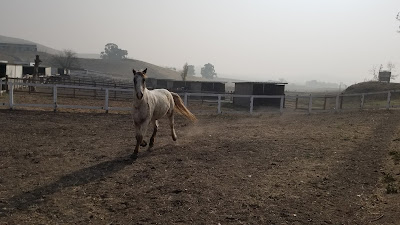 My brain sometimes forgets Finn is green. I worked with Holly thru 3 years of learning and kinda forgot new horse, new/ old stuff to learn. Just like kids lol.


He is smart in all the good and bad ways. He is pretty creative in all his ways to avoid work, but also smart enough to remember he got in trouble, and rarely needs to be told twice. We had to back off rewarding with treats as he started goosing everybody with those cute little pony lips trying to feel out a carrot or peppermint.

Ground wise, Finn was never super naughty, just touchy and really didnt like his legs touched or a halter put on. Now i halter him from outside his paddock thanks to the muck and he wears all sorts of boots, and is even decent for our farrier.

I'm a big weenie and have had to really work on my frame of mind while riding him.

He occasionally spooks and it took until this week for me to get confident in knowing his type of spook. Answer: really mild. Two steps away with cute little pony ears pinned and major Appy side eye at the offensive item. I constantly am reminding myself that I used to take far worse shenanigans from 16h horses I can handle it a foot or so closer to the ground. 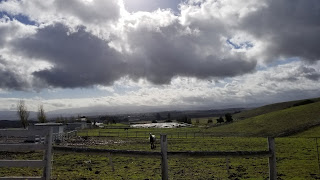 Saturday 3 of us we rode thru one of the craziest sounding storms I've been in the metal roofed barn for, and he was a solid citizen. I couldn't hear my trainer 2 ft away. The only scary thing to him was a pad lurking on a stool my trainer sits on. He got over it on the second pass.

We did some really nice backing straight, haunches in, and some insanely good for a noob turn-on-the-fore.  He moves off the leg so well, I really have to work at asking not yelling my aids.

I must have been feeling really ballsey for surviving the storm on him because I finally jumped him. Super baby cavaletti but still I'm happy. WS can keep him learning the big stuff til I get brave again. He has a smooth jump, just likes to add a foot extra to everything still lol. 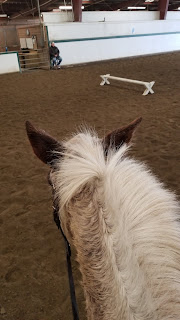 I think by summer he will be awesome to really test out how much my kids want to ride. 😎😈😇