Well, guess I'm a bit behind. Its been so long, my update drafts need updates, so here I am starting fresh...

2. I had one of my best lessons ever a few weeks ago. Actually saw distances and nailed them. Nailed them. In the indoor. In the like 40mph wind (which is now a new norm around here) making crap blow around.

3. Then I got all into my head and had a series of crappy, land on neck, barely squeak over the jump, just plain in your head crap-tastic lessons because I told myself my riding well was a fluke. D'oh.

4. Despite still being a weenie, and unmotivated to jump big, I have been back up to the 2'3" and maybe just 2'6" ... slightly less weenie height.


5. Our first adventures in NQR land.  It was always once she was a few laps into trotting, where you spend like two laps trying to figure out if its real or in your head. It started after a rough trainer ride 2 Tuesdays ago, she was so slightly off that night.  And the next day. And the next week.

She earned herself some bute, and new shoes all around, and a mini vacation. Then it was gone.


6. Hives. Because being NQR wasn't enough for the month, Holly now has hives. Mainly on her neck and belly. More bute and a shot of dex and more time off. Sigh. 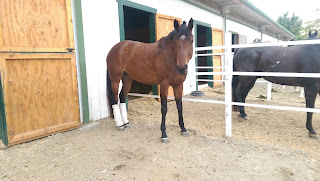 Then there's all that non-horsey filler life stuff:

-I'm now a mother of two.
-We are trying to clean our house to sell it. Good lord, I'm a packrat I have a lot of hobbies.
-We are house shopping in a very competitive area. Which will mean paying more per month to live in a better area (I do that for my horse-child, I kinda owe the human ones the same).
-I'm back to working nights. Ugh. Actually I missed many coworkers, and that whole using my brain for more than measuring how much milk the baby is drinking, but still, Ugh.