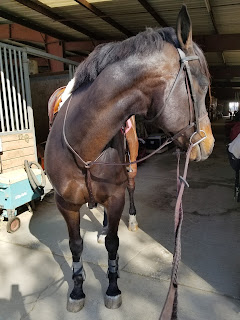 Had another lesson on Jasper. Was offered coming on Tues and ride him, or Weds and ride Belle as Jasper's owner was riding Weds. Opted to stick with the horse I am comfortable on for another ride, because I was sure my comfort on my first ride back was a fluke.

But it wasn't. I still felt overall really good. Like I am sure if he went into some bucking fest, or spooked, or any other horsey- shananigans, I would have flopped off and been a wreck. But he was a solid enough citizen, and I apparently after several years have some muscle memory on how to not be a total noob in the saddle.

I do still have my left foot which wants to sink into home position, chicken elbows, and stiff hips, so apparently I am mostly back to where I was, just minus any core muscles.

We used draw reins, because why not torture me farther by making me struggle to maintain two sets of reins. We did achieve moments of awesome frame though, and really it ended up feeling pretty normal too.

I worked really hard at keeping us both more upright and not falling on the fore, something most horses easily sneak past my attention until I am holding their freaking head up and wondering why my back hurts and trainer is yelling at me.

Another lesson this next week. Hard to fit more in with short list of horses to ride, and this cute guy wondering where his food source mom went.