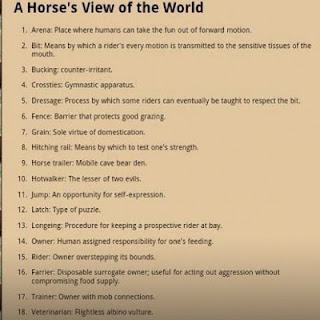 Ok so lets see, I am apparently a few weeks behind...

The Tues after my last post (2 weeks ago) I rode Magic, and did some ugly but ok jumping. We went over different little combinations, unfortunately after watching the better gals go first over larger fences, leaving me enough time to over think everything, and my husband to wander out to feed the baby, so no video/ pics. Poor Magic had a bad case of the runs, making him a little grumpier than normal. I was still pretty nerve racked, even though he's a begrudgingly good packer. Other than my head screaming "no no no" every time our trainer said again, it went well enough.


Last Monday I didn't ride, Louie had the runs and was still under the weather, so he got some loving and a day off.

Tuesday lesson I rode him but between nerves and a rotten feeling gut myself, I totally became a big weenie and didn't jump. I just couldn't get past the nerves over if I would be able to sit Sir Bouncy after we landed and he decided to lead change. I got an earful from everyone, and our trainer let me know this was my last pass. (gulp) I did get to watch Lyssette do the circle of death, which was great to watch.


Decided to take an afternoon lesson Monday, since riding in the cold and dark all the time is a bit glum after awhile. I rode Magic again, he needs lots of motivation to move, but only needs steering once in motion. C rode Louie, which was nice to get to see how he is with someone else. Karley was there while we flatted, lots of posting trot, and two-pointing at the trot and canter. We jump a small x and vertical back and forth, back and forth.

It felt really good after the first time or two I might even go so far to say I enjoyed it :) Hubby got a few videos, and while its not pretty, I'm not so all over the place, and I stayed on so there's that. I was SUPER sore which made last nights lesson even more fun... More about last night and more  video to follow :)