The beginnings of Fall

Had our first lesson inside in awhile. It was howling windy outside, and the temperature was dropping, leaving the inside arena feeling a little more inviting. Then we remembered it kinda sucks. No L, so it was just E, myself, Karley, plus a few others not in the lesson. Our trainer has already informed us that their would be lots of interesting grids etc this winter to keep us busy, and tonight was no exception. We did lots of shoulder in/ haunches in, which I haven't done in forever with any real effort.... uh yeah.. we will add that to the Monday hack to do list. Decent canter work other then my chicken elbows flapping a bit, really awesome looking I'm sure.

Then we went to jumping... Took a picture to better describe what I will call  barrel racing with jumps. 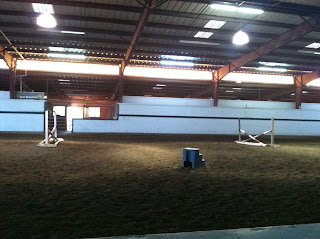 So basically, we trotted the first x-rail, then instead of jumping the second, circled around the mounting block at a canter, then jumped the second x-rail. It sounded cool, and I was happy I did it later, but it was work while Karley and I were doing it. I was of course, my normal tense self, and had to apologize to my perpetually grumpy mount for bumping him a few times. Funny thing was after the first couple times I wasn't as tense over the jumps as I was circling the mounting block. I've never had to look so far over to one side from a jump, it was hard to deviate my gaze to the side. Ah so many things to learn to relax into. Once we kinda had it down of course our trainer made us circle twice, just to keep 'em guessing.

This will be an interesting winter for sure.