Saturday morning chill quickly gave way to 50-60F (70F by afternoon) weather during our lesson. Near cloudless skies, slight chill to the wind that inevitably kicks up as we make our way down to the outdoor, but otherwise a glorious January day. Remind me how much we enjoyed this when its stanky hot and we have a severe water shortage this summer ;)

Anyways, as usual I was running late to lesson, but everyone seemed to be kinda mellow, so I didn't end up too far behind the group (BTW, I am 99.9% always early to work, I do know how to be on time when I'm paid lol). Tacked up Holly and took her down to the big roundpen. She went nuts, having had a whole day off, she bucked and bolted and hot lapped herself around for quite some time. Its why I love how huge the lower round pen is, it could nearly pass for an arena, so they can really stretch out a bit.

Dragged a now tired looking pony up to the arena and hopped on. She wasn't fazed by the tractor finishing dragging the (hard hard) arena, (yay!) and we quickly got to work.

We did lots of sitting and posting trot while our trainer and a couple of the barn girls up from college set up and rearranged our mix of hunter and eventer jumps we now have spread across the whole arena. 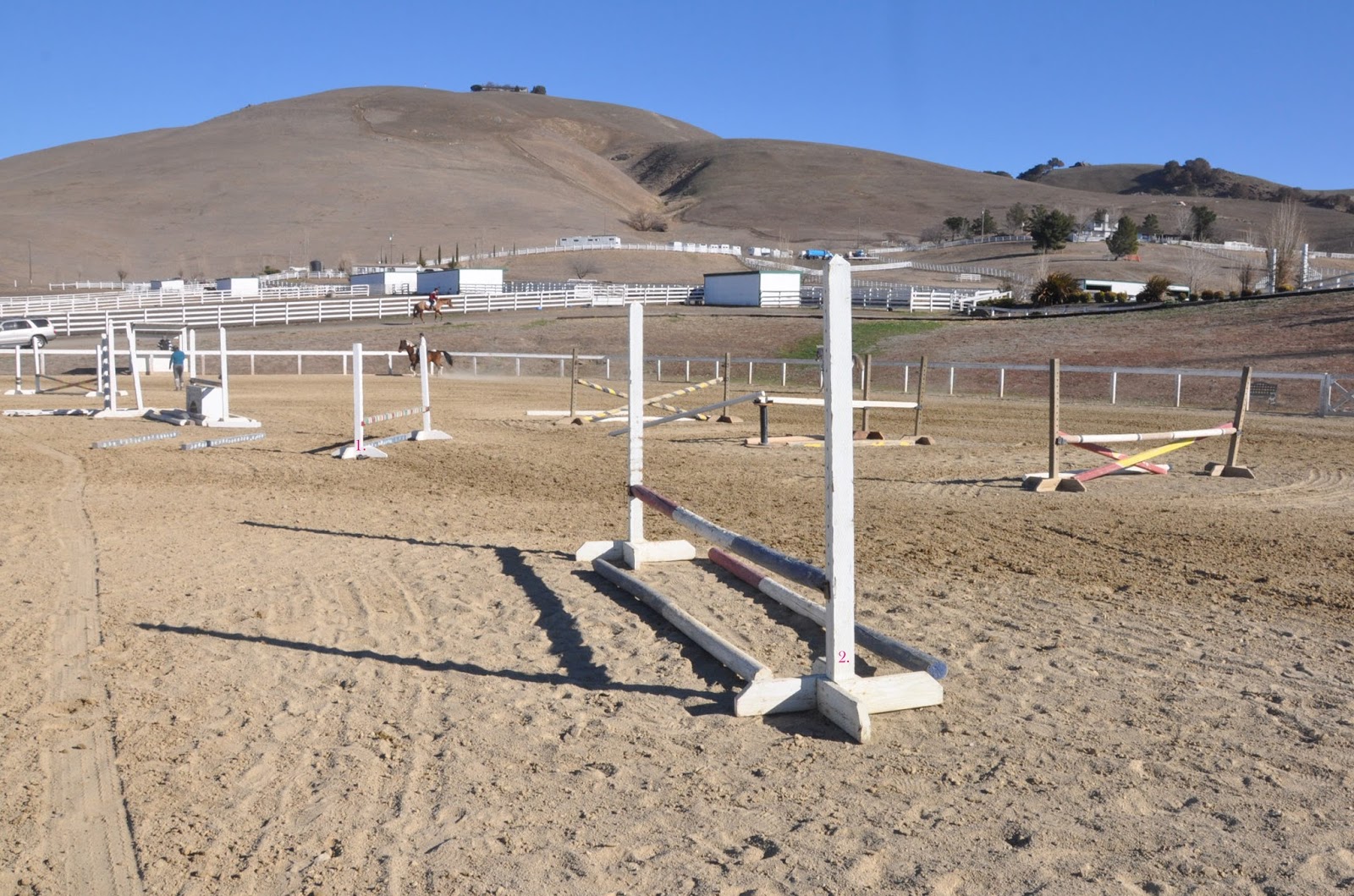 Worked on that thing called frame, and keeping her up into the bridle. Cantering I had to work on not letting her fall into the corners, tried to circle at random times to keep her paying attention. I don't know if I'll ever be able to sit her canter, it simply rocks me up and out of the saddle, even when I try to relax (and think things like be a sack of grain through my lower body), but its at least getting more balanced. 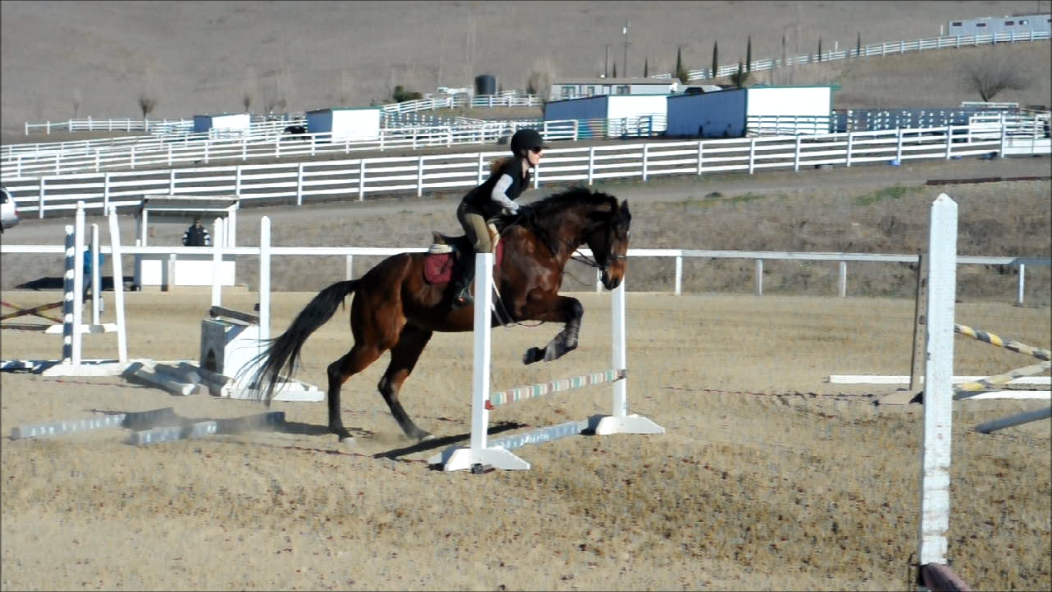 Jumping! I didn't do anything big, apparently it was make Kat suck it up and work on lead changes day. We went back and forth over two different verticals (just L and I were jumping). They were at slightly funny angles in the arena which made me think a bit about where to turn in to get the right line. I finally felt comfortable on her again, even trying lead changes (ok I was still tense, but it was less tense lol). 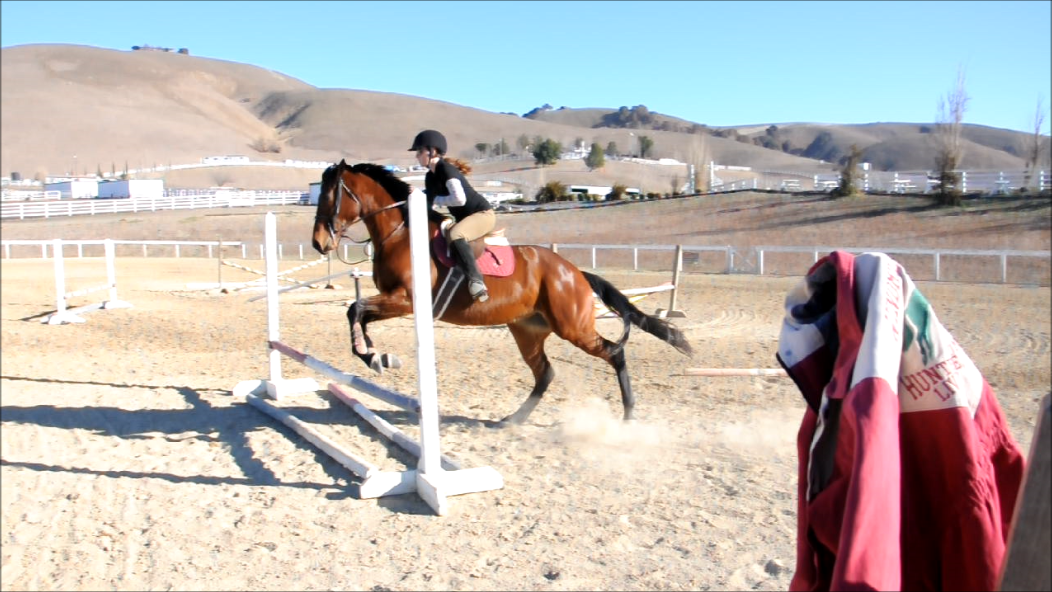 
General consensus of the railbirds was I needed to just let go of her head and let her go forward more. Very hard for me to do apparently. Of course by the point we went into figure 8's for lead changes, there were a ton of other people in the arena, several just chilling on the ground (?!) and several others riding, making me a little paranoid about taking out other trainer's students.

I have been thinking a lot about how I feel about Holly lately. Two nights ago I looked at everyone's $100k posts, and thought, gee, I'd prob buy another horse. Then I read about other people losing their beloved horses and realized I really have been keeping a huge wall up between my mare and myself. I went to lesson yesterday morning with an intent to bond with my mare. And we rode better. Most of my problems are in my head (I know that much) and when I view her as my horse, who is trying her best for me, and that I am her rider, who needs to try my best to help her learn, I think it helped. I gave her more loving then usual after our ride, and realized I need to spend more time with her, more ground work and more relaxed, non-lesson time.

Not sure that all makes sense outside of my head, but hey, even though I sucked at lead changes, and my back is killing me now, I still walked away feeling like I had a good ride, which is huge for me, I found the positives and moved on.