Saturday-My bff Ashley got married. It was beautiful weather, on a beach, what's not to love. I need to give mother nature a big shout-out for letting us make it through her special day without a downpour (at my wedding it rained...hard). Eventually my DH or I will get around to editing some photos from the wedding. Found out sharing a king bed with a one year old is an adventure all in its own.
Monday- Hack with Karley. Grabbed Magic through the mist (its June right?) and saddled him up. Luckily he was pretty clean so grooming was fast. Figured since the weather was weird and there  were all sorts of noises (i.e. the horse-eating Johndeerasaurus moving, rain gently beating against canvas, etc) we'd just circle right on around to the open side of the arena and get it over with. We walked past fairly uneventfully, so we went around and came back by both ways at a sitting trot. A little twitch here and there but otherwise not bad.

Then Magic decided somewhere mid-lap around the same f-ing corner he'd been ridden past already a million f-ing times but now there was idk, something different, and he was going to have a temper-tantrum that rivaled any toddlers. I felt him tense and slow, so I pressed him up with as much leg as I could muster at a posting trot. He spun, despite some pretty darn short reins, and I was just happy to still be on (yay full seat breeches). Then came the internal voice shouting at me to sit back, spur, put the dang reins in one hand and whip his ass..... I managed like one thing at a time, while Mr Grumpy was backing, turning and just being a brat. Karley reminded me to do things my speed-of-a-snail brain wasn't processing fast enough. Once I finally back off his face and found more leg we did LOTS of circles around the scary end, until we could behave.

SO that being settled, we cantered. There was a little ducking on the left lead, but with some strong aids, he went around, albeit his frame was rather hideous. Then I switched directions. In the mean time, an older lady on a little Arab came in and was trotting around, also not amused by the open end of the arena. Magic came around at a canter and I could feel him pulling us inward, but honestly I think I just am not rough enough, he 'spooked', causing the Arab to spook, and bounced me around like a kid. We did the whole temper tantrum again, and eventually my anger overcame enough of my annoying fear and we both got a grip, and circled until my inner leg was worse then anything outside the arena.... 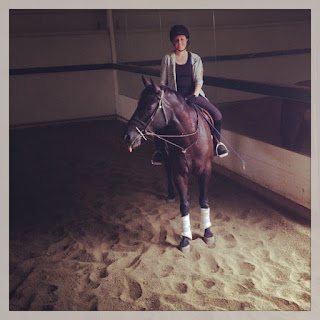 Cooled him off then made him canter a lap, because he tends to assume he knows what comes next, ah lesson horses. Made him as pretty as possible without rinsing him, gave him some loving and cookies, because he's really cute when he wants to ho home, and put him away.

Stewed on things as I drove home, feeling a bit defeated, I thought we were past these battles of will.
1)I know its me, I've seen the other gals ride him, he can be dirty, but I am just not the aggressive rider he needs.
2)I am not sure why I have such a hard time one-handing the reins to use a whip or crop, I started by riding western for pete's sake! I used to think split reining felt weird, clearly that's changed.
3)I don't want.... eh, how to put it... most days I just wanna putz around on the dang horse, not spend the whole time testing the depths of my adrenaline capacity. I have always been more towards the timid then aggressive rider, but now I lack that fire, that drive to push myself past it. I'm not sure how that fits with my currently leasing Magic and taking lessons jumping.

Oh well, fake it til ya make it (or find another path)...