First day of hacking Magic. I went to get him out of his new digs in he mare motel next to Henry and realized how little he looks next to his TB buddies. His little head barely sticks over the wall. He is super bay right now with his shaggy winter coat and for some reason he Roiling Stones song Paint It Black (my fav) came to mind...
Any-who, brushed shaggy beast and took my time since it wasn't a lesson. It was crazy wind again so since I did t want a huge spookfest/ fight I stayed towards the closed end of the arena, especially when two gals with greenies decided to uh... We will call it Lunge... Their high high horses in the round pen then the arena with us.

We did some decent sitting trot the. Lots of posting, working on impulsion and collection and not getting corners (ie me paying attention). Cantering was eh, he was lazy and wasted so much energy vertically instead of forward.

Then crazy greenies came into the arena and we pretty much cooled the boys out and left. 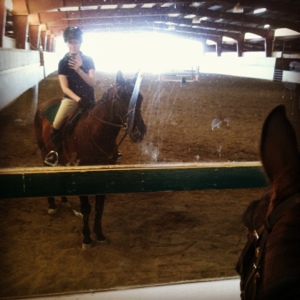 Lesson bright and early, ugh I'm gonna be sore! No pain no gain right?
Posted by Kitty Kat at 9:08 PM